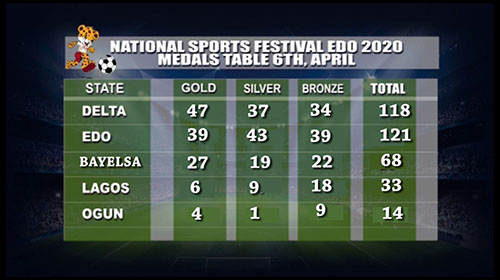 As at Saturday tenth April 2021, Delta State continues to maintain the lead at the top of the medals table of the ongoing Edo 2020 National Sports Festival with forty-seven gold medals, thirty-seven silver, and thirty-four bronze with a total of one hundred and eighteen medals.

Edo State is placed second with thirty-nine gold, forty-three silver, and thirty-nine bronze, a total of one hundred and twenty-one medals.

The medals table is updated daily.