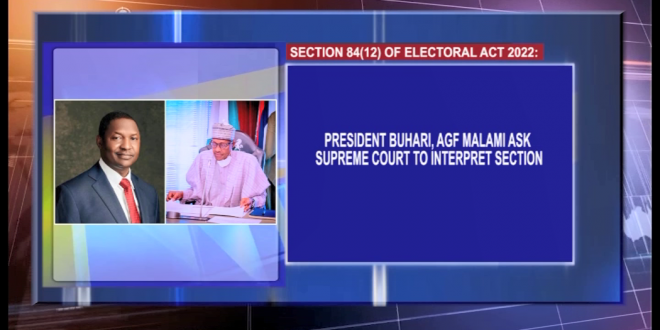 President Muhammadu Buhari and the Attorney-General of the Federation (AGF) and the Minister of Justice, Abubakar Malami, have filed a suit at the Supreme Court, seeking an interpretation of Section 84(12) of the Electoral Amendment Act 2022.
In the suit filed on April 29, the President and AGF, who are the plaintiffs, listed the National Assembly as the sole defendant.
They are seeking an order of the apex court to strike out the section of the Electoral Act, saying it is inconsistent with the nation’s Constitution.
According to the court document, the plaintiffs contend that Section 84 (12) of the Electoral (Amendment) Act, 2022 is inconsistent with the provisions of Sections 42, 65, 66, 106, 107, 131, 137, 147, 151, 177, 182, 192 and 196 of the Constitution of Federal Republic of Nigeria, 1999, (as amended), as well as Article 2 of the African Charter on Human and People and Peoples Rights.
President Buhari and Malami also contended that the Constitution already provides qualification and disqualification for the offices of the President and Vice President, Governor and Deputy Governor, Senate and House of Representatives, House of Assembly, Ministers, Commissioners, and Special Advisers.
They urged the court to make: “A declaration that the joint and combined reading of Sections 65, 66, 106, 107, 131, 137, 147, 151, 177, 182, 192 and 196 of the Constitution of the Federal Republic of Nigeria, 1999, (as amended); the provision of Section 84 (12) of the Electoral Act, 2022, which also ignores Section 84(3) of the same Act, is an additional qualifying and/or disqualifying factors for the National Assembly, House of Assembly, Gubernatorial and Presidential elections as enshrined in the said constitution, hence unconstitutional, unlawful, null and void.”
In the same vein, the National Assembly has asked the Supreme Court to strike out the suit instituted by President Buhari.
The National Assembly, in its counter-affidavit, filed by its lawyer, Kayode Ajulo, said the Supreme Court cannot be invoked to amend the provision of any law validity made by lawmakers in the exercise of their legislative powers as granted by the Constitution.
They argued that the 1999 Constitution, as amended gave the National Assembly the power to make laws for good governance in Nigeria.
www.itvradiong.com
www.youtube.com/itvradiong
www.facebook.com/itvradiong
Twitter: @itvradiong
Instagram: @itvnga
Share
Previous Governor Tambuwal Relaxes 24-Hour Curfew In Sokoto
Next Tertiary Institution Students Protest, Block Benin-Auchi Road, Federal Secretariat In Benin Over ASUU Strike 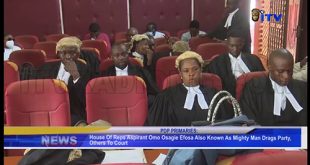 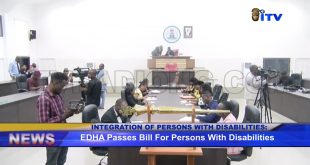 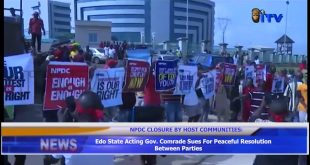