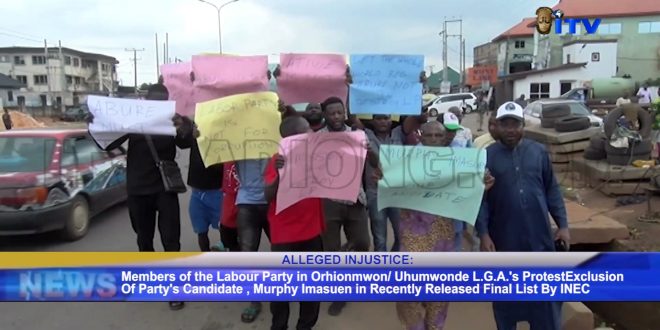 Members of the Labour Party in Orhionmwon and Uhunmwode Local Government Areas, Edo state including some executives who conducted the party’s primary that produced Murphy Imasuen as the candidate for the federal constituency seat on Friday protested to the state INEC Office in Benin City over his exclusion in the final list released by INEC.
The peaceful protest took the aggrieved Labour party members to the State Party Secretariat and the Secretariat of the NUJ.
Kingsley Uchegbu has details.
www.itvradiong.com
www.youtube.com/itvradiong
www.facebook.com/itvradiong
Twitter: @itvradiong
Instagram: itvng
Share
Previous Gov. Obaseki commends sterling virtues of Princess Adesuwa Emovoen
Next Kidnappers kill victim in Uhen forest in Edo