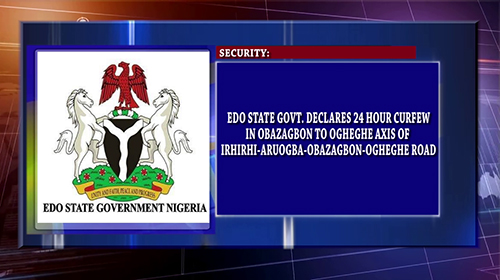 Edo State Government has declared a twenty-four-hour curfew in the Obazagbon to Ogheghe axis of the Irhirhi-Arogba-Obazagbon-Ogheghe Road, beginning from twelve midnight Thursday, September twenty-nine, 2022 to twelve midnight Friday, September thirty, 2022.
In a statement the Secretary to the State Government, Osarodion Ogie said the curfew is to make way for a security exercise in the affected areas.
The statement said the government is conducting a security operation in the area and warns members of the communities to steer clear of the Obazagbon to Ogheghe axis of the road, so as not to endanger themselves.
It advised residents in the area to stay indoors as the government embarks on the security exercise.
The affected areas are from Obazagbon Junction to Ogheghe Junction on the Irhirhi-Arogba-Obazagbon-Ogheghe Road and environs, from Ogheghe Junction on the Irhirhi Road up to Ogba River and environs, road connecting Okoroma Junction on the Irhirhi Road to Amagba and environs and from Amagba Junction to Ogba River on the Ogheghe – Obagie Road link to Sapele Road and environs.
Ogie advised motorists and pedestrians to use alternative routes as anyone found loitering in the area during the curfew will be arrested.
www.itvradionigeria.com
www.youtube.com/itvradiong
www.facebook.com/itvradiong
Twitter: @itvradiong
Instagram: @itvng
Share
Previous Court declares Machina APC candidate for Yobe North Senatorial District
Next Betsy Obaseki assures physically challenged victim of justice