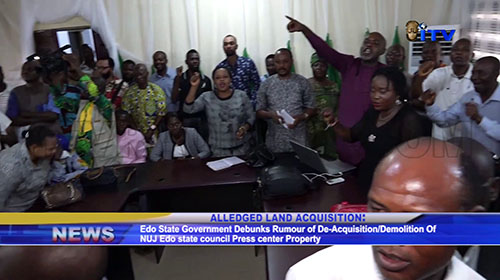 Arising from the outcry by Members Of Edo State Council Of Nigeria Union Of Journalists and Concerned Citizens of Nigeria over the proposed plan by Edo State Government to grab the piece of land given to the NUJ by Oba Akenzua the second, the Governor of Edo State Mr. Godwin Obaseki has sent emissaries to the leadership of the union to dowse the tension of what the Government described as rumours.

The State Commissioner for Communication and Orientation, Barr Chris Nehikhare who led the government delegation on the visit assured journalists of a Cordial relationship.