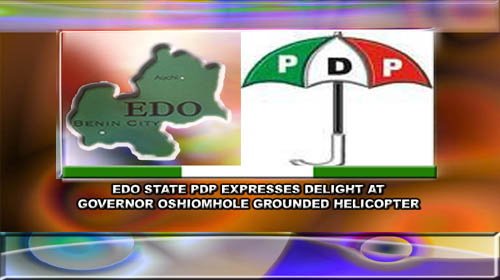 Edo State Chapter of People’s Democratic Party, PDP has expressed delight at the refusal of the Nigerian Civil Aviation Authority to allow Governor Adams Oshiomhole’s chattered helicopter to fly out of the Benin Airport.

A statement by the Edo State Chairman of the Party, Chief Dan Orbih wondered why the governor would prefer to travel on such a short trip to Ekiti with tax payers money on chattered helicopter instead of making it by road.

The statement said today’s event is a confirmation of what the PDP says that the governor spends between 25 to 30 million naira monthly on chattered helicopters which are of no economic benefit to the people especially on local trips to Iyamho which is less than a couple of hours drive.

The statement also challenged the governor to make public the cost of such chattered flights to international and local destinations.