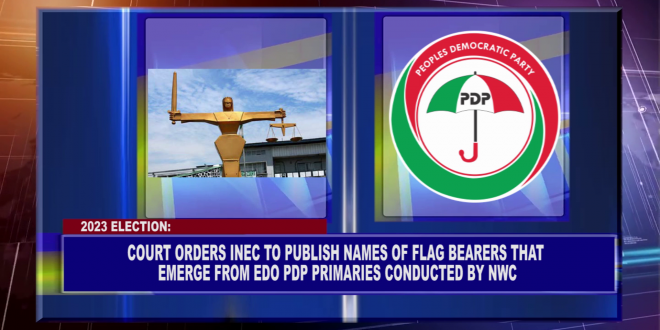 A Federal High Court in Benin has ordered the Independent National Electoral Commission to recognize and publish the names of candidates that emerged from the primary election conducted by the National Working Committee of the People`s Democratic Party in Edo State as flag bearers of the party in the forthcoming 2023 elections.
In a judgement delivered on Tuesday, the presiding judge, Justice S.M Shuaibu granted all the reliefs sought by the plaintiffs.
The plaintiffs include the party’s candidate for Edo South Senatorial District, Matthew Iduoriyekemwen; Sunny Aguebor for Oredo Federal Constituency, and the flag bearer for Akoko Edo Federal Constituency, Kabiru Adjoto, among others.
Among the reliefs sought by the plaintiffs is an Order of Court mandating the fourth defendant, INEC to publish the names of the plaintiffs as the validly elected candidates of the Edo State Chapter of PDP for the 2023 general elections, flowing from the primary election conducted by the National Working Committee of the party.
The Judge held that based on past decisions by the Supreme Court and Court of Appeal, the state chapter of a political party is not empowered by law to conduct party primaries and that only the National Working Committee of a political party has the power to conduct party primaries.
The Judge held that the power of INEC under Section 84 of the Electoral Act is limited to monitoring of party primary elections and does not extend to preparing or declaring the results of that election.
Justice Shuaibu further held that the fourth defendant, INEC, cannot rely on results prepared by the first defendant.
www.itvradiong.com
www.youtube.com/itvradiong
INDEPENDENT TELEVISION/RADIO
Twitter: @itvradiong
Instagram: Itvng
Share
Previous Edo State PFN Inaugurates Youth Wing Of Directorate Of Politics And Governance
Next Rotary Club Of Benin District 9141 Donates Books, Counsel Students Of UDSS Benin City