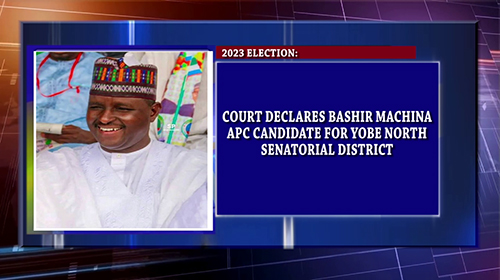 The Federal High Court sitting in Damaturu, Yobe State has declared Bashir Machina as the rightfully elected candidate of the All Progressives Congress primary election of the Yobe North Senatorial District.
The presiding Judge, Justice Fadimatu Murtala, pronounced the ruling today, bringing the about four-month controversy to rest.
Bashir Machina and the Senate President, Ahmad Lawan who is representing Yobe North have been at loggerheads over the ticket won by Machina at the primary held on June nine, 2022.
The Senate president, who contested the presidential primary and lost to Bola Tinubu, however, jostle for the senatorial ticket, won by Machina at the primary.
www.itvradionigeria.com
www.youtube.com/itvradiong
www.facebook.com/itvradiong
Twitter: @itvradiong
Instagram: @itvng
Share
Previous Edo Poly Usen Gets Multi-Million Naira Internet Connectivity From NCC
Next EDSG declares 24 House Curfew in Obazagbon to Ogheghe, Benin