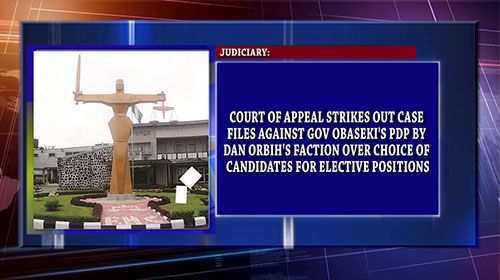 The court of appeal sitting in Benin has struck out the case filed against Governor Godwin Obaseki’s faction of the PDP by the Dan Orbih faction, who is the appellant.

In a unanimous decision, justice TN Orji Abadua, justice T O Awotoye and justice S O Nwaka said Ogbeide Ihama and thirty-four others did not file their case within the record of time.t lack jurisdiction to attend to party issues and therefore struck out the case.

In a unanimous decision, justice TN Orji Abadua, justice T O Awotoye and justice S O Nwaka said Ogbeide Ihama and thirty-four others did not file their case within the record of time.

The judge noted that the court graciously gave them a time frame to file their appeal which was not filed within that period hence the court threw it out especially as the court lacks jurisdiction to entertain the case.

Lead counsel to the 34 respondents and Governor Obaseki faction of the PDP, Barrister Osewinde Osehimenmen said the judgement is a victory for the party.
He said the PDP is one family and called on other aggrieved members to come together and work assiduously for the party towards victory.

Other members of the PDP including the PDP House of Representatives candidate, Ovia federal constituency, Omosede Igbinedion also commented on the judgement.
Meanwhile, the lead counsel to the appellant and Dan Orbih’s faction Barrister Pascal Ugbomeh however explained the judgment in his own understanding is in favour of both parties.

Present at the court ruling were members of both factions of the PDP.