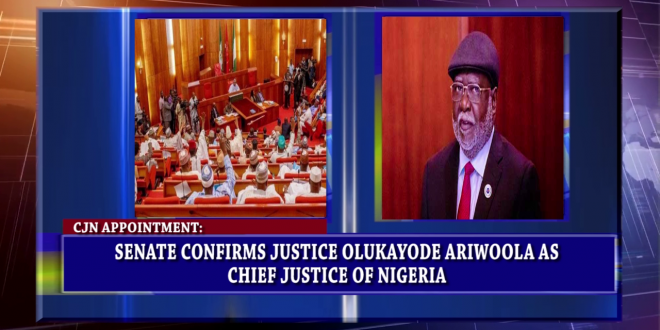 The Senate today confirmed the appointment of Justice Olukayode Ariwoola as the Chief Justice of Nigeria.
At the resumption of plenary, Senate Minority Leader, Senator Ibrahim Gobir, moved two motions for the upper chamber to screen Justice Ariwoola.
His motions were approved by the Legislators when they were put to a voice vote by the Senate President, Senator Ahmad Lawan.
The Senate thereafter asked Justice Ariwoola to take a bow and leave.
Justice Ariwoola was accompanied to the upper chamber by all Supreme Court Judges, President of the Court of Appeal, President of the Federal High Court, President of the National Industrial Court and Secretary of the National Judicial Council.
www.itvradiong.com
www.youtube.com/itvradiong
www.facebook.com/itvradiong
Twitter: @itvradiong
Instagram: itvng
Share
Previous Edo State Executive Council Approves Reduction Of Ministries, Departments And Agencies
Next IUO Buratai Centre Visits Stakeholders, Set To Hold International Conference In 2023