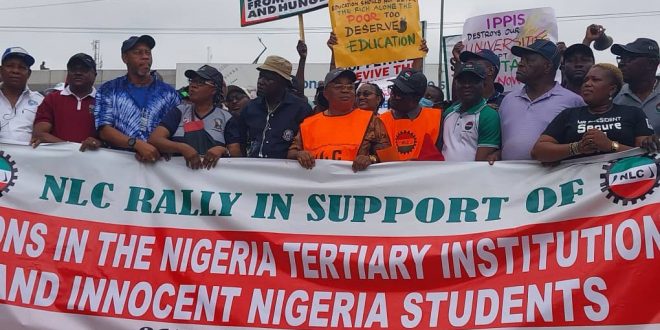 The Nigeria Labour Congress on Wednesday continued its protest in Abuja over the prolonged strike by university workers across the country.

This comes a day after a similar demonstration held in various states of the Federation, except in the Federal Capital Territory.

The protest began at about 8:30am after members of the NLC leadership and leaders of various affiliated unions converged on the Unity Fountain in the nation’s capital and then to the National Assembly where the NLC president would deliver a message from the labour unions to the lawmakers.

Lecturers in government-owned universities affiliated with ASUU embarked on a nationwide strike on February 14 over the adoption of the Integrated Personnel Payroll Information System of the government as the payment system in the university sector, as well as poor funding of universities, and non-payment of salaries and allowances of some of their colleagues, among other issues.