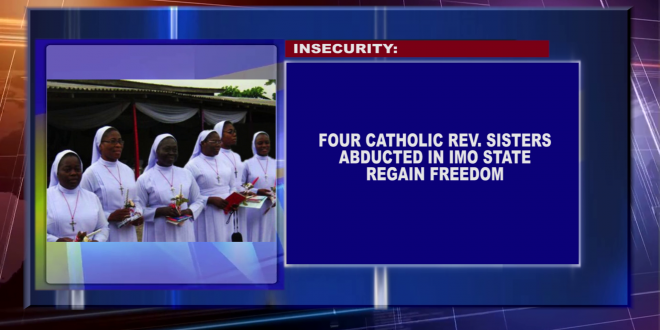 The four catholic sisters abducted last Sunday at Umulolo community along Okigwe-Enugu Expressway in Imo State have been released.

The sisters identified as Johannes Nwodo, Christabel Echemazu, Liberata Mbamalu, and Benita Agu were said to be on the way to a morning mass when they were kidnapped.

Imo state police spokesman, Michael Abattam, who confirmed their release on Wednesday said the four reverend sisters were freed on Tuesday unhurt, but refused to reveal if ransom money was paid.

Also, confirming the release of the sisters to the press in Owerri was the Secretary-General of Sisters of Jesus The Saviour, Zita Ihedoro.

The abduction of the Catholic sisters was the latest attack in the southeast.