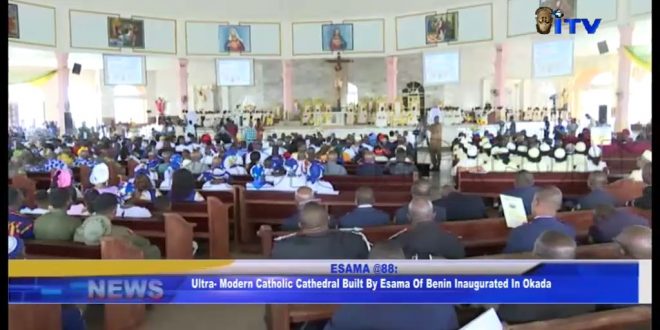 The Catholic community across the world and Christians from other denominations today joined the Honourary Romanian Consul to Edo and Delta States of Nigeria, His Excellency, Sir, Chief, Doctor Gabriel Osawaru Igbinedion, Esama of Benin as part of his eighty-eighth birthday celebration as he officially handed over the ultra-modern Saint Gabriel the Archangel Catholic Church, Okada and a school to the Archbishop of Benin Metropolitan See, Most Reverend Augustine Obiora Akubeze.
Efosa Uwangue reports that the high and the mighty in the society including Edo State Governor, Mr. Godwin Obaseki and former President of Nigeria, Chief Olusegun Obasanjo and Cardinal Peter Okpaleke who represented the Catholic Pontiff, Pope Francis graced the historic event.
www.itvradiong.com
www.youtube.com/itvradiong
www.facebook.com/itvradiong
Twitter: @itvradiong
Instagram: itvng
Share
Previous Retinue of Bishops and Priests Arrive in Edo State for Church Dedication in Okada
Next Several Dignitaries Grace Dedication Of Archangel Gabriel Catholic Church Okada, Built By Esama