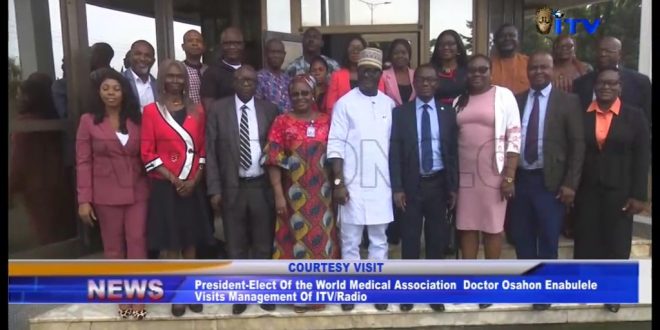 The President-Elect of the World Medical Association, Doctor Osahon Enabulele has asked for support from Independent Television and Radio in the dissemination of information regarding activities of the World Health Organization.
He made the appeal on Tuesday during a courtesy call on the management of the stations in Benin City ahead of his inauguration holding in Berlin Germany, on October the 7th, 2022.
Favour Osaro has the details.
www.itvradiong.com
www.youtube.com/itvradiong
www.facebook.com/itvradiong
Twitter: @itvradiong
Instagram: Itvng
Share
Previous Gov. Obeski Urges Private Sch. Owners To Improve Teaching And Learning
Next GM Independent Radio, Pastor Dan Omozusi Elected PRO Of Edo South Cooperative Union