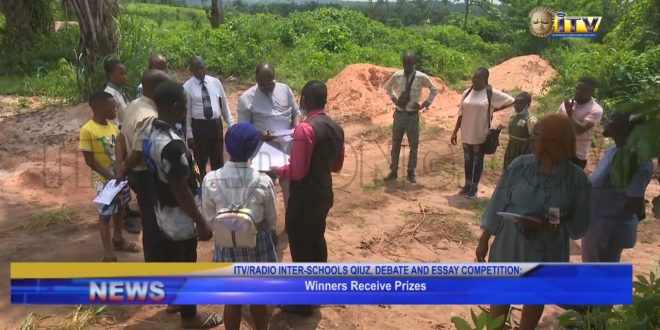 Winners and first runners up in the 2021 ITV Radio interschool quiz, debate and essay competition have been given documents of plots of land as Prizes promised by organizers of the competition.
Sharon Ajayi reports that the plots of land were donated by Getrich Global Concept in it’s Overflowing Grace Estate in Okhunmwun community and De Prince Builders Real Estate Development Limited in it’s new Phase 8 estate Ekhua community on Benin- Auchi Road Benin City.
The Chairman, ITV/Radio special event committee, Mr. Sunny Duke Okosun presented land documents to Ukpebor Jennifer from Akhienle Group of School, who took the first position in Essay competition, Enabulele Osawese, second position in Essay and Zigma group of schools first position in Debate while Eloghosa Divine Orobosa came second in the quiz competition
In a remark the CEO, Get Rich Global concept limited, Austin Edegbe Edafe said it was necessary to fulfill the promise made during the 2021 ITV/Radio Inter-Schools Quiz, Debate, and Essay Competition by giving documents of four plots of land to winners of the various categories in the competition.
The recipients commended Independent Television and Radio for organizing the event. They also expressed gratitude to Get Rich Global concept for the Plots of land.
School proprietors and a parent thanked Get Rich Global Concept for the landed property presented to their pupils.
In a related development, documents of the two plots of lands promised winners during the 2021 ITV/Radio Inter-Schools Quiz, Debate and Essay Competition, were presented by the CEO, D prince builders and estate developers, Engineer Cyril Omoregie to the winner Quiz category Ogbemudia Juliet from higher wisdom Academy and first runners up in the debate category john Arebamen from Akhienle group of schools Ekpoma.
The recipients who were overwhelmed with joy thanked the Prince Builders Estate and developers for the plots of land.
The Chairman, ITV/Radio special event committee, Sunny Duke Okosu, expressed delight that successful participants in the 2021 ITV/Radio Inter-Schools Quiz, Debate and Essay Competition have received their prizes of plots of land.
He appreciated Get rich global concept limited and the D Prince Builders Estate Developers for their support and magnanimity.
ITV/Radio Inter-Schools Quiz, Debate and Essay Competition is a yearly event that allows pupils of primary schools and students of secondary schools to showcase their intellect and win prizes.
CAP: 2021 ITV/Radio Inter-Schools Quiz, Debate and Essay Competition:
Winners receive Prizes.
www.itvradiong.com
www.youtube.com/itvradiong
www.facebook.com/itvradiong
Instagram: @itvng
Share
Previous Gov. Obaseki Inspects Catchment Areas Of Benin Storm-Water Project
Next FBI INDICTMENT: IGP RECOMMENDS SUSPENSION OF DCP ABBA KYARI AS 4-MAN SPECIAL INVESTIGATION PANEL BEGINS PROBE