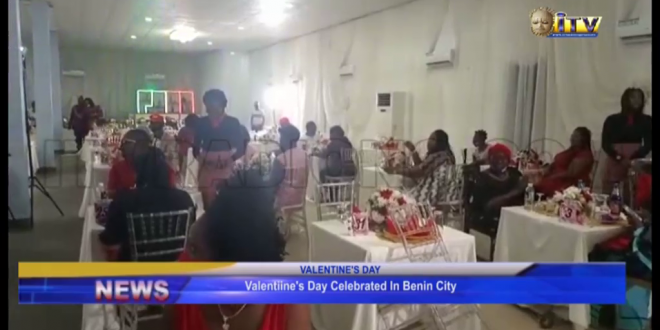 Today is Saint Valentine’s Day, celebrated across the world in commemoration of the memory of a Priest, who worked against the decision of the roman Empire to outlaw married soldiers in the military formation of the Roman Empire.

He was imprisoned and executed on fourteenth February.

Saint Valentine was a dispenser of love and an epitome of justice, equity, selflessness and sacrifice.

As part of the commemoration of Saint Valentine’s Day, ITV/Radio today organized a Special Couples Classic in collaboration with Efedosa Signature
It was a day to rekindle love and affection as couples, lovers and others converged on the prestigious Edo Central Hotel, Efedosa Signature on Akpakpava street in Benin ,during the Valentine’s day show.

Best Mbiere reports that couples participated in games while others took part in singing competitions with a view to win prices.

Details of the report will be brought to you, in our subsequent bulletin.