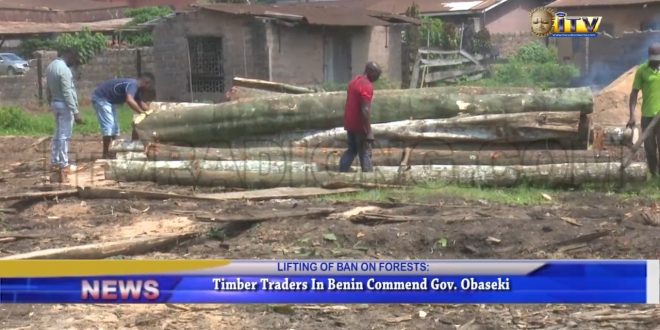 Some Timber Traders in Edo State have commended the State Governor, Godwin Obaseki over lifting of the ban on harvest of logs or Timber.
The Timber Traders, who spoke with Best Mbiere also narrated their ordeal of being out of business for two months.
Many of the sawmills visited in Benin City were devoid of commercial activities as business was yet to fully bounce back following two months of ban of all forest activities.
Some Timber Traders said the past two months were unbearable for them and their workers, whose only source of livelihood was in the timber business.
They however thanked Governor Godwin Obaseki for rescinding his decision on the ban.
Governor Obaseki said with the lifting of the ban, the state government will enforce control measures including tracking of movement of logs with patrol teams.
He added that experts have been contacted to assist with the best practices on how the forest reserves can be best preserved noting that only members of the Saw Millers and Timber Association will be granted approvals to sell logs.
www.itvradiong.com
www.youtube.com/itvradiong
www.facebook.com/itvradiong
Twitter: @itvradiong
Instagram: @itvng
Share
Previous Orhionmwon PDP reaffirms unflinching support for Obaseki, others
Next Activist Sunday Igboho, others storms Ondo in agitation for secession