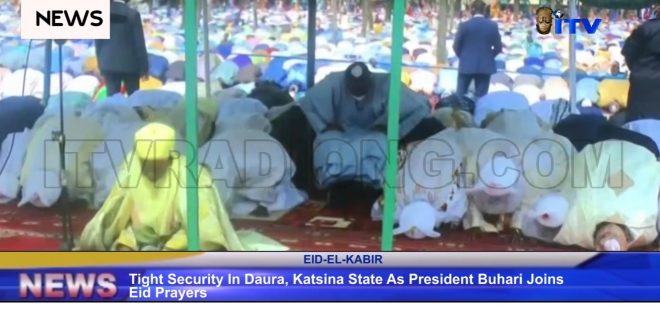 There was tight security in Daura, the country home of President Muhammadu Buhari in Katsina State at the Kofar Arewa Eid prayer ground.
The two Rakat prayers led by Imam Safiyanu Yusuf Dansanwai commenced at ten in the morning.
Joining the President for the two Rak’at prayers are his son, Yusuf and the Emir of Daura, His Royal Highness Umar Faruk Umar as well as other top-ranking personalities.
Security personnel drawn from the Police, Army, the Department of State Services, the Nigeria Security and Civil Defence Corps and other sister security agencies were on the ground to provide maximum security for the President, his entourage and other worshippers during the Eid Prayer.
www.itvradiong.com
www.youtube.com/itvradiong
www.facebook.com/itvradiong
Twitter: @itvradiong
Instagram: @itvng
Share
Previous Muslims In Benin City Join In Global Celebration Of Eid-El-Kabir
Next Acting Gov. of Edo State Philip Shaibu Enjoins Nigerians To Seek God In Prayers To Curb Insecurity