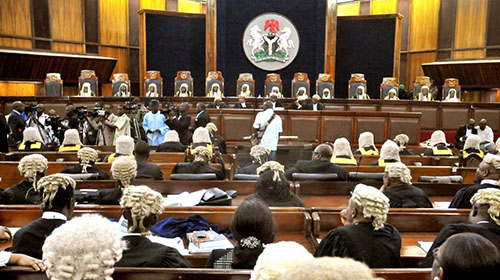 The Nigeria Supreme Court has stroke out an appeal before it on the grounds that it failed to prove its case beyond a reasonable doubt, therefore, uphold the court of Appeal judgment.

A unanimous decision of the 5-man panel said the appellant failed to prove their Case of forgery hence the case collapse from the beginning.

One million Naira was also awarded in favor of the Respondent.

Meanwhile, the Deputy Governor of Edo State Comrade Philip Shaibu, has described the Nigeria Judiciary as the referee of Nigeria’s Democracy through enforcement of the rule of law, to protect the minorities from the power of the majority, despite their attempts to tilt the playing field against the rules.

“The ruling of the Supreme Court today has shown that the Judiciary does not lack teeth. The rule of law is the strong pillar and rock on which Nigeria’s democracy stands. Every other foundation is made of sinking sand because the judiciary is no longer bound by artificial limitations,” he said.

Comrade Philip Shaibu who was reacting with enthusiasm over the Supreme Court judgment today, that reaffirmed the victory of Governor Godwin Obaseki in a landmark judgment, said the Supreme Court displayed decisional and institutional independence which underscores the ability of the judiciary to make decisions free from political influence.

According to him, the Judiciary constitutes the most important vessel in the sustenance of democracy in Nigeria, even as he reminded politicians that the Supreme Court is not a systematic instrument for the acquisition of political power.

“The final judgment today has demonstrated to the World that the Nigerian Judiciary is not a pawn in the hands of desperate politicians to realize their ambition. The rule of law has prevailed and this has demonstrated further that no one can sit above the law. Justice is the greatest interest of man and the ligament which binds civilized people together. Today’s judgment has reinforced this saying due to the celebration all over Edo State and other parts of the World.

“The extent to which the Nigeria Judiciary is free to perform its roles and efficiently too will determine how developed and how deep-rooted our Democracy will be,” the Edo Deputy Governor enthused.

While commending the Judiciary for bailing the nation out of the woods and for waging an unrelenting war against arbitrariness, highhandedness, wickedness, and injustice, the Edo Deputy Governor cautioned politicians that Nigeria is operating the rule of law and not rule by law where unjust and oppressive laws are enacted with hyper-politicized Courts to oppressed others.