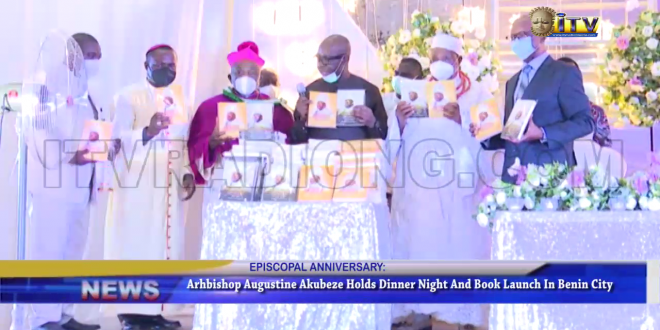 A book written by the archbishop of the  Catholic Archdiocese of Benin City,  Most Rev Augustine Obiora Akubeze, titled Exercise of Prophetic Ministries, has been launched in Benin City.
Pius Nsogho reports that the ceremony which had the Esama of Benin and Honorary Romanian consul to Edo and Delta states Sir Chief Dr. Gabriel Osawaru Igbinedion as the father of the day, attracted several dignitaries from all walks of life, including the governor of Edo state Godwin Obaseki and a former governor of Cross Rivers State, Mr. Donald Duke.
The book titled “exercise of prophetic ministries” which has volume one and two was unveiled by the governor of Edo State, Mr. Godwin Obaseki to the delight of guests.
In a remark, Mr. Godwin Obaseki described the author of the book and Archbishop of the  Catholic Archdiocese of Benin City,  Most Rev  Augustine Akubeze as a man grounded in administration and with implicit knowledge of God’s word.
He commended his support for the state government with his useful advice.
Father of the day and Esama of Benin, Sir Chief Dr. Gabriel Osawaru Igbinedion said as Archbishop of the Catholic Archdiocese of Benin City,  Most Rev.Augustine  Akubeze has recorded remarkable achievement and also expanded the frontiers of the Catholic church more than ever.
Chairman of the occasion and former governor of Edo state Chief John Odigie Oyegun said as president of the Catholic Bishops Conference of Nigeria Archbishop Akubeze commands dignity and makes Parishioners enjoy the worship of God.
The book which features some of Archbishop Augustine Akuebuze’s selected homilies was reviewed by Rev Fr Edwin Omorogbe and thereafter launched by dignitaries who graced the event.
Some guests who said the book will be useful to all and sundry applauded the scholarly effort of Archbishop Akubeze in writing such a book.
The book launch which also featured dinner night was part of activities marking the episcopal anniversary of Archbishop Augustine Akubeze’s ten years as Archbishop.
Notable personalities within and outside the state attended the ceremony.
www.itvradionigeria.com
www.youtube.com/itvradiong
www.facebook.com/itvradiong
Instagram: @itvng
Share
Previous Suspended Enogie of Essi debunk allegation, passionately appeal for lifting of suspension
Next Family announces the passing away of Capt. Hosa Okunbo