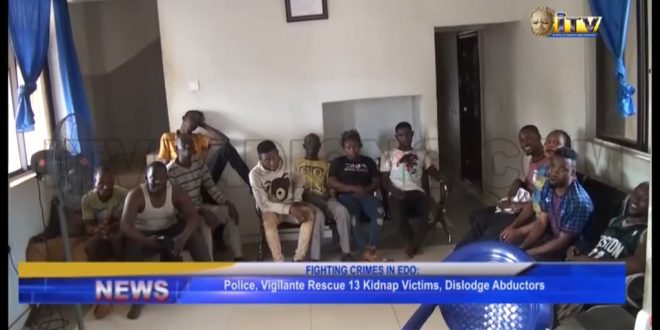 Thirteen persons have been rescued from the kidnapper’s den in Ahor axis of Aduwawa bypass, along Benin Auchi expressway, Uhunmwonde local government area of the state by a combined team of security personnel in Edo state.
Personnel of Edo State Police Command, local hunters and members of the Edo State Vigilante Security Network Carried out the operation.
Two of the 13 persons rescued were kidnapped on Thursday.
Others rescued are travellers travelling from Lagos to Akwa Ibom State, and from Lagos to Onitsha, Anambra State.
Addressing journalists shortly after the rescue operation, Edo State Commissioner of Police, Philip Ogbadu said the command deployed drones and were assisted by hunters and members of the Vigilante Security Network set up by the state government.
He assured that the command will not relent in its quest to rid the state of kidnappers.
The state Police commissioner urged residents to provide useful information about the activities of kidnappers in their communities to the authorities to help arrest criminals.
Coordinator of the Edo State Community Vigilante Security Network, Mr. Yusuf Haruna, said the success of the operation is a testament to what the Edo State Government is doing with the new security architecture in identifying and understanding behaviours of crime and criminality in the state.
It was gathered that the rescued victims were taken to Magnus Eweka Police Cottage Hospital for thorough medical examinations before they will be handed over to the state government to assist them to proceed to their destinations.
www.itvradionigeria.com
www.youtube.com/itvradiong
www.facebook.cAom/itvradiong
Twitter: @itvradiong
Instagram: @itvng
Share
Previous INEC creates 924 new polling units in Ondo State
Next Govt. adverts bloody clash as two die, Tipper set ablaze in Akure