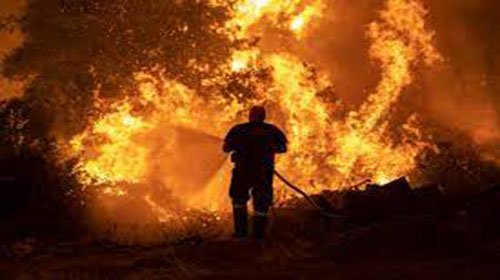 Greece’s prime minister Kyriakos Mitsotakis has apologized for failures in tackling the wildfires tearing across the country.

Hundreds of firefighters have been battling the huge fire that has forced thousands of people to flee their homes and destroyed dozens of properties.

Thick smoke is still Billowing out off the island of Evia, northeast of Athens, which has been on fire for a week.

Dozens of homes and acres of forest have already been scorched to the ground in Evia, on the outskirts of the capital, and in other parts of Greece.

Hundreds of residents have been ordered to leave the island to escape the fires, though some were determined to stay to defend their properties.

The fire which has been raging for over a week has prompted the residents of the affected area to protest which they called delays and breakdowns in the government’s response, including lack of water-dropping planes.

Grace Prime Minister Mitsotakis said in an address appeal for calm and said the authorities have done what was humanly possible, but in many cases, it was not enough and that country was facing a natural disaster of unprecedented dimensions.

Mr. Mitsokasis has pledged hundreds of millions of euros to support those whose livelihoods have been destroyed by the fire.

Over 1,000 firefighters, planes, and extra equipment have been flown in by other countries, including EU states, Russia, the UK, and US.

The EU said it was mobilizing one of Europe’s biggest ever common firefighting operations to help Greece and other countries fight wildfires.

Three people were said to have been killed by the fire, including a volunteer firefighter hit by a falling pylon, while an industrialist was found unconscious at a factory near Athens last week.

A third man was killed on Monday when his bulldozer fell into a cliff during a fire.

Several others have been taken to the hospital after suffering from smoke inhalation and burns.