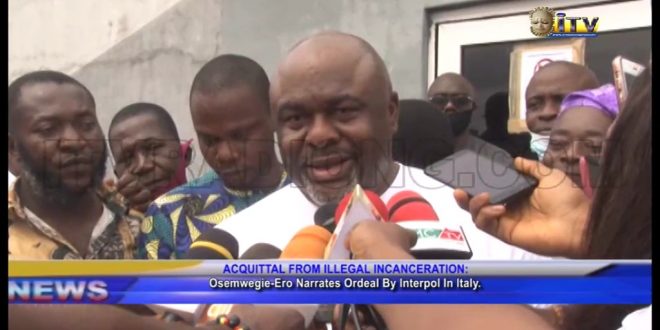 A former  Commissioner for Arts, Culture, Tourism and Diaspora Affairs,  in Edo State, Mr. Osaze Osemwegie- Ero has expressed appreciation to the Government of  Edo State for their prayers and support throughout his stay in prison in Italy for trumped-up Allegations on Criminal activities.
Osaze Osemwegie-Ero made the remarks on his arrival at the Benin Airport today.
The immediate past commissioner for arts, culture, tourism and diaspora affairs was given a warm welcome at the Benin Airport by friends, associates and well-wishers
Mr. Osemwegie -Ero who was very emotional while narrating his ordeal in the prison in Italy said over 300 Nigerians are locked up in Prison for alleged criminal activists without proof.
He said over 20 innocent Nigerian have also been imprisoned for various offences
Mr. Osemwegie-Ero said he was arrested for crimes he never committed on his way to Berlin with a colleague for an official assignment.
He assured of leading a crusade against the Italian Justice System for detaining innocent Nigerians.
Mr. Ero thanked the Governor of Edo  State Mr. Godwin Obaseki, Ewuare the 2nd Oba of Benin and other well-meaning Nigerians for their prayers and support all through his illegal incarceration.
Friends and associates and students unions from the University of Benin organized a mini reception marking his arrival where they eulogized him for his outstanding performance while in office.
Until his arrest after the National festival for arts and culture in 2019 hosted by Edo state,  Mr. Osaze Osemwegie-Ero was the State Commissioner for arts, culture, tourism and diaspora affairs.
www.itvradiong.com
www.youtube.com/itvradiong
www.facebook.com/itvradiong
Instagram: @itvng
Share
Previous Stakeholders applauds State Government’s decision on Ban of Okhaighele activities
Next Fatal accident claims two lives in Auchi