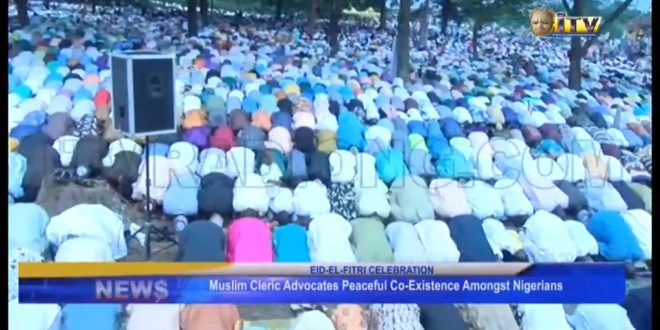 Nigerians have been advised to tolerate each other and live harmoniously as one as well as resist attempts towards disintegration in some quarters.
The advice was given by the chief imam of Benin Central mosque Alhaji Abdul fatal Enabulele during this year’s Eid prayer to mark the Ei del-Fitri.

Sea of heads at the Ikpoba slope prayer ground as Muslim faithful converge to participate in the eid prayers led by the chief imam of Benin central mosque Alhaji Abdul Fatai Enabulele.

The prayer climaxed the 30day fasting by Muslims which is one of the five pillars of Islam and significant part of the Eid El-Fitri.

The Chief Imam Alhaji Abdul Fatai Enabulele enjoined moslems to continually look up to Allah to hear their prayers and devote their time to  ventures that will unite the country rather than preaching division.

Barrister Amin Alao,Mutairu Osagie and Victor Eghator said it was time for Muslims and other Nigerians to intensify prayers for the country and edo state for continuos peace.

They expressed optimism that Allah will hear their prayers especially against insecurity in the country.

There was high traffic presence at the ikpoba slope axis while  security officials had a hectic time putting it into control.

The restrictions in the number of persons allowed in public events by the Presidential Steering Committee On COVID 19 did not deter worshippers from converging on the EID prayer ground.

Muslims faithful also used the opportunity to do a special  dance which added spice to the event.

Some traders made brisk businesses during the event.