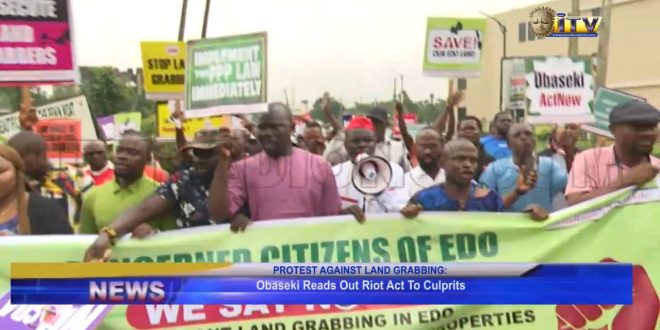 The Governor of Edo State  Mr. Godwin Obaseki has read riot Acts to People who illegally acquire Land in the State warning that culprits will be made to face the full wrath of the law no matter their status.
The Deputy Governor of Edo State, Mr. Philip Shaibubu gave a stern warning while addressing the group of protesters under the name, ‘concerned citizens of Edo State’ who took to the streets today to protest against unwholesome activities of and speculators.
The protesters who commenced their match from Oba Ovonramwen Square through Airport Road, Ezoti, Reservation Road en route to Government House chanted solidarity songs to press home their demands.
The Protest which was necessitated by the recent outcry by various Edo Indigenes both home and in the diaspora over the forceful seizure of their land by different Community Leaders including the banned Okaighele.
Leadership of the protesters said they resolved to take to the streets to put a stop to the ugly menace which have prevented investors and developers from coming to Edo state.
Some victims of land grabbing who also joined the protest appealed to the State Government  to come to their rescue
The deputy Governor Philip Shaibu while addressing the protesters assured them that nobody irrespective of his position whether political, traditional, or otherwise will be spared the hammer when they violate the law.
www.itvradiong.com
www.youtube.com/itvradiong
www.facebook.com/itvradiong
Instagram: @itvng
Share
Previous Esama of Benin felicitates with UNIBEN VC on the occasion of her birthday
Next EDHA constitutes committee to investigate allegations against Ohen of Okhuoromi