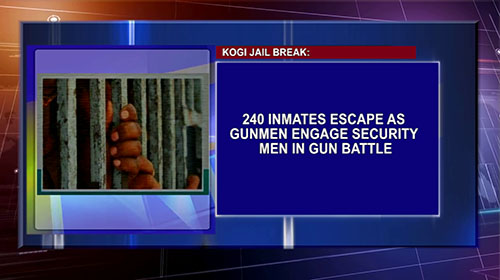 About two hundred and forty inmates have escaped the Medium Security Custodial Centre in Kabba, Kogi State, following an attack by gunmen.

The Nigerian Correctional Service, spokesman, Mr. Francis Enobore confirmed the incident in a statement, stating that the attack took place at about midnight on Sunday.

According to him, the attackers in their numbers arrived at the custodial center heavily armed and immediately engaged the guards in a fierce gun battle.

As of the time of the invasion, 294 inmates were in custody out of which 224 were pre-trial detainees and 70 convicted inmates.

Confirming the incident, the Assistant Inspector General of Police Zone Eight, Ayuba Edeh, said the Commissioner of Police and other heads of security agencies have swung into action for an assessment of the cause of the situation.