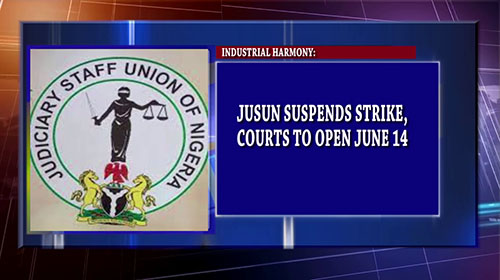 The Judiciary Staff Union of Nigeria, JUSUN, has suspended its strike action that paralyzed judicial activities across the federation for over two months.

JUSUN had on the Sixth of April, 2021 ordered its members across the federation to shut all courts in the country to press home its demand for implementation of financial autonomy for the judiciary.

A source at the Supreme Court confirmed that JUSUN’s decision to suspend the strike action was due to the intervention of both Chief Justice of Nigeria, Justice Ibrahim Muhammad, and the National Judicial Council, NJC.

Media aide to the Chief Justice of Nigeria, Mr. Ahuraka Isah, further confirmed the report, adding that JUSUN has already directed its members to resume work on Monday.

President Muhammadu Buhari had on May 22, 2020, signed into law, an Executive Order that granted financial autonomy to the legislature and the judiciary across the 36 states of the federation.

The order equally mandated the Accountant-General of the Federation to deduct from source, any amount due to state legislatures and judiciaries from the monthly allocation to each state, for states that refuse to comply with the Executive Order.