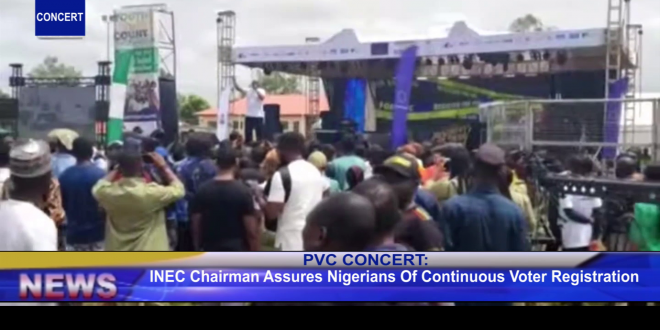 The Independent National Electoral Commission has assured Nigerians that the ongoing continuous voter registration would not end on June 30, 2022 as earlier announced.

INEC Chairman, Professor Mahmood Yakubu disclosed this today during the Youth Vote Count Mega Concert organised by the commission in partnership with Yiaga Africa and funded by the European Union at the old parade ground, Abuja.

Professor Yakubu, who was silent on the duration of the extension, said the commission would decide on the timeframe and communicate the outcome to Nigerians.

He said fourteen thousand Nigerians were registered in five days at the venue of the concert.

The INEC Chairman assured that the commission would deploy more machines to register Nigerians.

He also said the Permanent Voter Card would be ready for collection from October ahead of next year’s general election.

He urged Nigerians to ensure that they use the PVC to vote during elections.