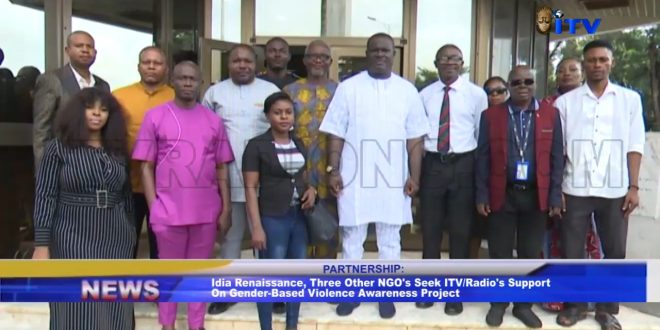 A delegation comprising representatives from Idia Renaissance, Society for Awareness and Family Initiative, Christabel Oteuroro foundation and Smile Africa International Youth Development initiative on Wednesday visited the Management of Independent Television and Radio, to appeal for the station’s support in the effective sensitization of members of the public on the need to curb Gender-Based Violence in Edo state.
Amenze Bazuaye reports that members of the delegation were received at the cooperate headquarters of the station, Glass House Airport Road Benin City.
www.itvradiong.com
www.youtube.com/itvradiong
www.facebook.com/itvradiong
Twitter: @itvradiong
Instagram: itvng
Share
Previous Over 70 Nursing Graduates Of IUO, Okada Inducted Into The Nursing Profession
Next Gov. Obaseki tasks Judges to key into E-Governance Policy

Mostly cloudy
19°C
Powered by Husstorm Technology Ltd.
Independent Television/Radio © Copyright 2012 - 2022, All Rights Reserved
We use cookies on our website to give you the most relevant experience by remembering your preferences and repeat visits. By clicking “Accept”, you consent to the use of ALL the cookies.
Cookie settingsACCEPT
Manage consent