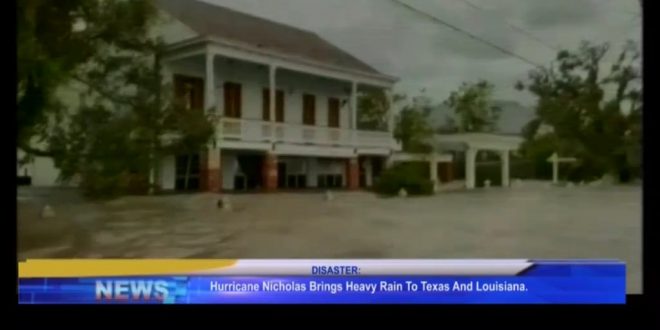 Hurricane Nicholas has made landfall on the Texas coast in the US, bringing heavy rain and the risk of life-threatening flooding.
The hurricane strengthened from a tropical storm late on Monday, before reaching land.
Following the landfall of Hurricane Nicholas, People in Texas and neighbouring state Louisiana have been told to expect power outages and storm surges.
Weather Forecasters say Hurricane Nicholas is said to carry maximum sustained winds of 75mph and that is expected to hit the Houston area with up to 18 inches of rain.
The US National Hurricane Centre warned that it could be life-threatening flash flooding impacts, especially in highly urbanized metropolitan areas, are possible, and the National Weather Service called it a life-threatening situation.
President Joe Biden declared an emergency in Louisiana and ordered federal assistance to the state.
While the Louisiana Governor John Bel Edwards in a news conference said the country will make sure that no one is caught off guard by this storm and warned that drainage systems still clogged from Ida could trigger flash floods.
More than 119,000 homes and businesses remain without power in Louisiana due to Ida, he added.
Texas Governor Greg Abbott declared states of emergency in 17 counties and three cities.
Dozens of schools across the two states have been closed, and hundreds of flights have been cancelled or delayed at airports in the Texas cities of Corpus Christi and Houston.
It comes just weeks after Hurricane Ida – the fifth strongest to ever hit the US mainland – killed dozens and left more than a million Louisiana residents without power.
www.itvradiong.com
www.youtube.com/itvradiong
www.facebook.com/itvradiong
Instagram: @itvng
Share
Previous Gridlock on Benin-Lagos Road as UNIBEN students protest increase in late payment of tuition fees
Next Attack on Kabba Prison: Over 114 inmates Recaptured