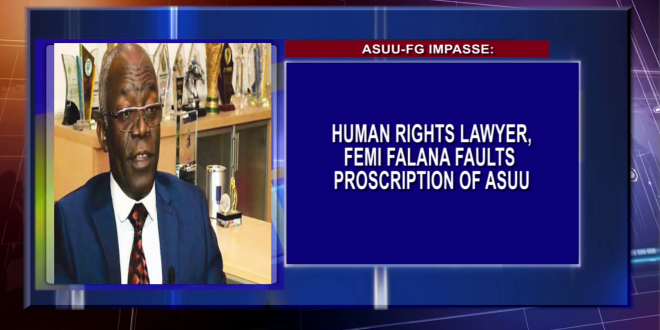 Human rights lawyer, Femi Falana, has called on the Federal Government to sign the renegotiated agreement with the striking members of the Academic Strike Union of University , ASUU.

Falana urged both ASUU leadership and the current administration to resume negotiations in order to end the prolonged strike for the overall good of Nigerian students.

While calling on both sides to resume the negotiations in the interest of the country Falana said the Federal Government should be prevailed upon to end the prolonged industrial action.

The rights lawyer is of the view that the Federal Government should commit itself to the faithful implementation of collective agreements reached with ASUU which are enforceable by virtue of the relevant provisions of the Trade Disputes Act instead of embracing the fascist option of prescribing union.