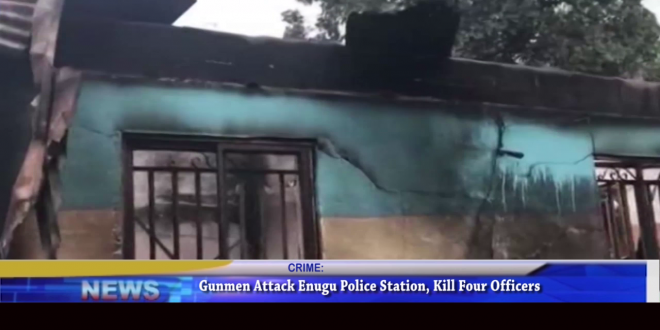 Gunmen today attacked Iwollo Oghe Police Station in Ezeagu Local Government Area of Enugu State, killing four officers.
Enugu State Police Commissioner, Mohammed Ndatsu said the officers died of gunshot wounds sustained in a gun duel while trying to repel the attack.
Following the attack, the Police boss and senior members of the command have visited the police station for an on-the-spot assessment.
He also extended his condolence to the families and close friends of the policemen, who paid the ultimate price in the line of duty.
Investigation has since been launched into the attack.
www.itvradiong.com
www.youtube.com/itvradiong
www.facebook.com/itvradiong
Twitter: @itvradiong
Instagram: @itvng
Share
Previous CBN sets N410.25 to a Dollar as new official exchange rate
Next Gunmen attack Enugu Police Station, kill four officers