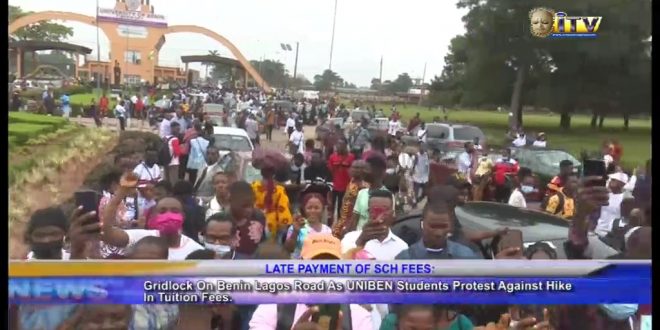 Traffic was disrupted today on the ever-busy Benin Ugbowo Lagos Expressway as protesting students of University of Benin barricaded the road for several hours to register their resentment over increment in fees by the management of the Institution.
Best Mbiere reports that motorists plying both sides of the road were stranded and passengers forced to proceed to their destination on foot.
Thousands of students of University of Benin occupied the Benin Ugbowo Lagos Expressway road to protest against the hike in tuition fees just four weeks after resumption for academic activities.
The protest created gridlock as vehicular movement was at a standstill.
Some commuters and motorists were stranded on the road, while others disembarked to continue their journey on foot.
The ever-busy Ugbowo Lagos road was turned into a football pitch as some of the protesting students played football.
The students said they could not resist taking over the Expressway after the Management of the University of Benin added twenty thousand Naira to the tuition fees for late payment of their school fees.
They said students who struggling to pay forty-five thousand Naira were forced to pay an additional twenty thousand Naira.
Some old students of the institution also joined the protest in solidarity.
At the time of this report, the management of University of Benin has not commented on the issue.
Share
Previous Youth Empowerment: FG Signs MoU With KONGA, Promises More Opportunities
Next Hurrican Nicholas brings heavy rain to Texas and Louisiana