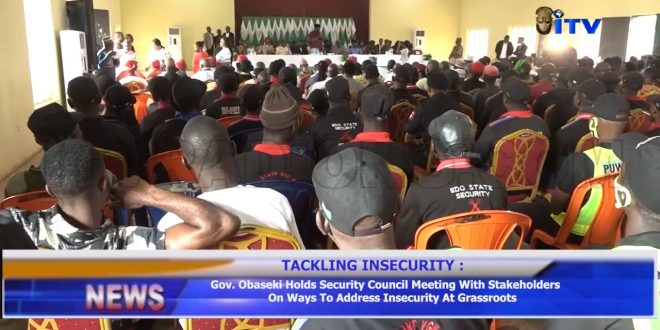 The Governor of Edo State, Mr Godwin Obaseki says The Anti- Open Grazing bill prohibiting open grazing by cattle rearers and regulating other livestock in the state was signed into law on 27th of May, 2022, pointing out that anyone caught violating the law will be prosecuted and made to face the law.
Governor Obaseki who disclosed this during a special security meeting with critical stakeholders in Edo North senatorial District said a committee to enforce the law on the ban on anti-open grazing would be set up in August this year.
Government House Correspondent Patience Osarogiuwa reports that the state government is set to launch the identification card for all residents residing in Edo State as part of measures to tackle insecurity in the state.
www.itvradiong.com
www.youtube.com/itvradiong
www.facebook.com/itvradiong
Twitter: @itvradiong
Instagram: @itvng
Share
Previous Some Voter Card Registrants In Benin City Engage In Last-Minute Rush As INEC Wraps Up CVR
Next Oba Of Benin Made Grand Patron, Hunter And Forest Security Service