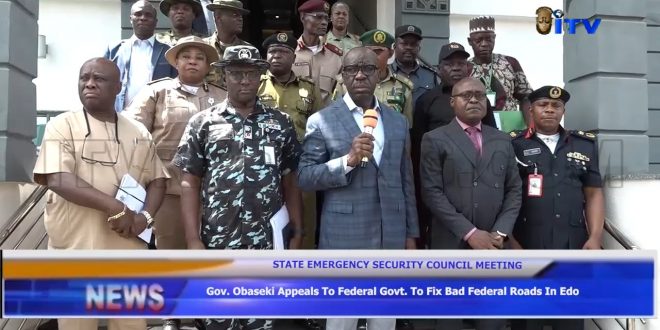 The Government of Edo State has called on security agencies, relevant organs and the federal governments to intervene and fix deplorable federal roads in the state.
The save our soul message is coming against the backdrop of the deteriorating condition of the Benin Ekpoma, Auchi Okpella roads which has been blocked by Protesting heavy-duty truck drivers.
Government House Correspondent Patience Osarogiuwa reports that governor Obaseki who disclosed this during an emergency Security Council meeting also threatened to arrest and prosecute anyone or group planning to disrupt the PDP presidential campaign in Edo State on Saturday
www.itvradiong.com
www.youtube.com/itvradiong
www.facebook.com/itvradiong
Twitter: @itvradiong
Instagram: @itvng
Share
Previous Supreme Court Affirms Sheriff Oborevwori As PDP Governorship Candidate
Next Truck Drivers Protest Over Deplorable Condition Of Benin-Auchi-Abuja Expressway Enters Day 5