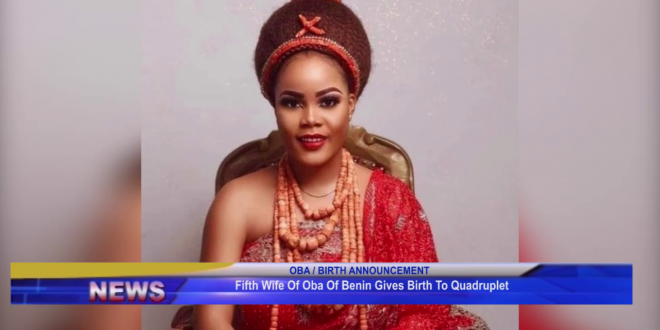 Fifth Wife Of Oba of Benin Gives Birth To Quadruplets.

His Royal Majesty Ewuare the second Oba of Benin has announced the birth of quadruplets by his fifth and youngest wife, Oloi Aisosa into the Benin Royal family.

An Elated Oba of Benin informed the enthusiastic palace chiefs, guests and journalists that his wife gave birth to three infant princes and a princess

The atmosphere was electrified as His Royal Majesty Ewuare the second Oba of Benin announced the birth of a quadruplet to the Royal family.

The palace Chiefs took to the dance floor to dance and celebrate the cheering news from Benin Monarch.

The Oba of Benin thanked God and his ancestors for a successful delivery of his children by his fifth wife, Queen Aisosa Ewaure and prayed that same joy that brought about the birth of his quadruplet will bring more blessings to the Queen, the palace and the entire Benin Kingdom.

He said the mother and his children are in excellent health.

He prayed for continuous peace, tranquillity and better security in Edo state.

The presiding priest of the oldest West African Church also known as Holy Aruosa Church, Ohen-Osa Igbinoghodua Edebiri offered prayers to God for wisdom and guidance for the new quadruplet.

The brief ceremony coincided with the visit of the National executive of Immaculate Conception College, ICC, and Alumni Association Benin City which is Oba Ewuare II’s Alma-mater.

The group was led by the President ICC Alumni Association worldwide, Engr. John Osa- Omoregie thanked the Benin monarch for his support towards the development of the school.

He said certain projects have been completed in the school and expressed gratitude to the Oba of Benin for his support.

Responding Ewuare the second said he will always support the association and promised to personally inaugurate the projects.

Also, the former Edo State Commissioner for Arts Culture, Tourism and Diaspora Affairs, Osazee Osawingie Ero in company with his family members and friends visited the palace of the Oba of Benin to thank him for his support and prayers during his incarceration in Germany.

The Benin Monarch congratulated him for his freedom.