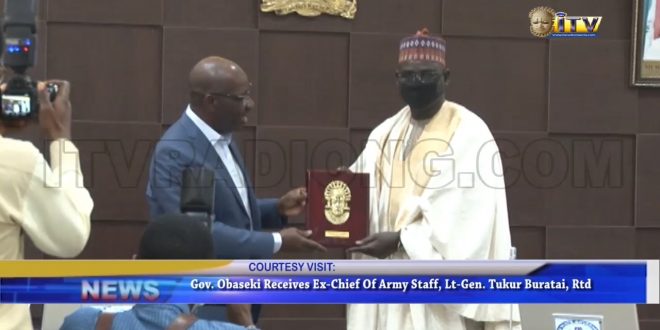 The Governor of Edo State Mr. Godwin Obaseki has commended the Federal Ministry of Science, Technology, and Innovation for choosing Edo State to establish technology and innovation centers for global competitiveness.
He made the remark today when he received the minister of science, technology, and innovation. Doctor Ogbonnaya Onu in government house Benin City.
Government House correspondent Patience Osarogiuwa reports that Governor Obaseki also received a former Chief of Army Staff, who is currently Nigeria’s Ambassador to the Republic of Benin,
Lieutenant-General Tukur Yusuf Buratai, retired who visited him.
www.itvradiong.com
www.youtube.com/itvradiong
www.facebook.com/itvradiong
Instagram: @itvng
Share
Previous Buratai Centre For Security Affairs Inaugurated In Igbinedion University Okada
Next Esama OF Benin, Congratulates Mike Onolemenmen On His Birthday