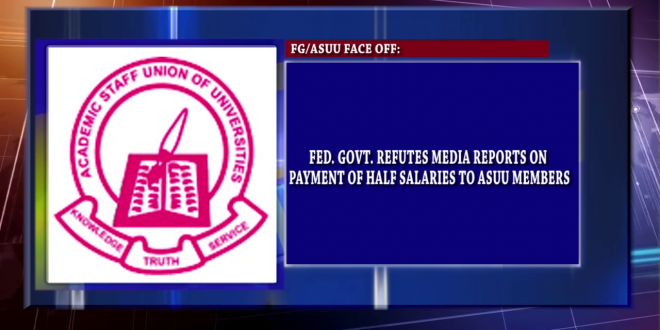 Fed. Govt Refutes Media Reports On Payment Of Half Salaries To ASUU Members

The Federal Ministry of Labour and Employment has refuted media reports, alleging bias in the payment of salaries of members of the Academic Staff Union of Universities.

The ministry dismissed ASUU claims that their members were paid half their salary for the month of October.

In a press statement issued by Head of Press and Public Relations, Olajide Oshuindun, the Ministry of Labour Ministry said the reports are grossly inaccurate, misleading and barefaced distortions of facts.

The statement explained that members of ASUU were paid their October salary pro-rata, and not half salary as the media widely reported.

According to the ministry, pro-rata was done because they cannot be paid for work not done.

It states that the Minister of Labour and Employment, Senator Chris Ngige, never directed the Accountant General of the Federation to pay the university lecturers half-salary.