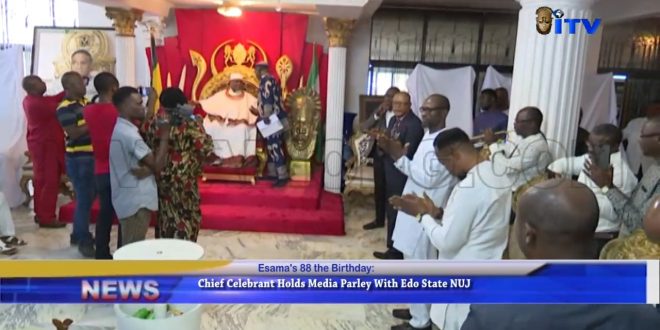 The Esama of Benin and Honourary Romanian Consul to Edo and Delta States, His Excellency, Sir, Chief, Doctor Gabriel Osawaru Igbinedion has been extolled as a man who has continued to blaze the trail in several facets of human endeavour.
The remark was made by the Edo State Chairman of Nigeria Union of Journalists, Comrade Festus Alenkhe when he led other members of the union to the Garden of Eden residence of the Esama of Benin for a media parley, ahead of his Eighty-eighth birthday celebration.
Pius Nsogho has details.
www.itvradiong.com
www.youtube.com/itvradiong
www.facebook.com/itvradiong
Twitter: @itvradiong
Instagram: Itvng
Share
Previous GM Independent Radio, Pastor Dan Omozusi Elected PRO Of Edo South Cooperative Union
Next 2023 Elections: EDHA Speaker, Barr. Igbinedion and others receive Certificates of Return