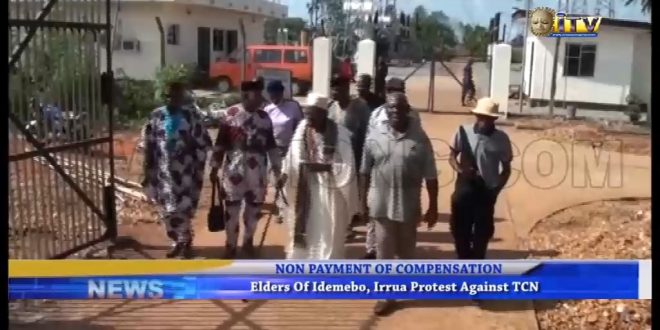 Elders of Idumebo, Irrua protest against TCN over non payment of compensation

Activities at the transmission Company of Nigeria Substation in Irrua was temporarily disrupted on Wednesday as elders of Idumebo, Irrua, led by the Odionwele, Pa Godwin Oseghale Okooboh took a protest to the station demanding for compensation of the usage of their land.
Edo Central Bureau Chief Fedinard Osakue reports that the elders handed a one-month ultimatum to the transmission company to remove the station if they fail to do so.
Pa. Godwin Oseghale Okooboh who is Ninty years old and the oldest man as well as the Odiowele of Idumebo Community, Irrua, Esan Central Local Government Area, led other elders of the community to the Transmission Company of Nigeria substation in the Community and threatened that the station would be halted from operation by the end of June if they fail to adhere to the agreement they had.
Pa Godwin Okooboh and some others who said they have been deceived for too long narrated how they entered into an agreement with the transmission company of Nigeria before ceding the land to them to house their equipment
They alleged that the promises òf the transmission company to step down power in their Community did not come to fruition as the equipment brought which was not installed for over a year was later removed and taken to Benin
They requested that the transmission company should make good their promises of compensating the landowners within one month to avoid unrest.
The Operation Manager of Irrua Sub Station Engr. Bassey Bassey appealed to the elders for calm and promised to channel their grievances to the appropriate authority who will look into their demands
Transmission Company of Nigeria was incorporated in November 2005 being one of the 18 unbundled business unit under the Power Holding Company of Nigeria for electricity transmission and system operation.
www.itvradiong.com
www.youtube.com/itvradiong
www.facebook.com/itvradiong
Twitter: @itvradiong
Instagram: @itvng
Share
Previous Federal Government Constitutes NYSC Board
Next Catholic priest killed another kidnapped in Katsina State