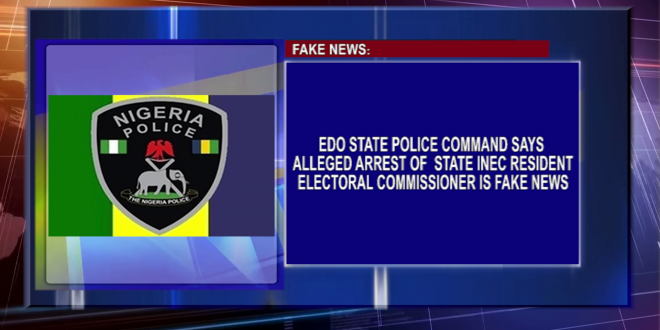 Edo State Police Command says its attention has been drawn to an online report that the Edo State INEC Resident Electoral Commissioner was arrested on 28th July, 2022 by men of the command.
The command has however debunked the news as fake and mischievous, pointing out that it was orchestrated to mislead the public and strain the seamless inter-agency synergy between the Nigeria Police and the Independent National Electoral Commission in the State.
A statement by the Deputy Police Public Relations Officer, ASP Jennifer Iwegbu says a petition dated 20th July, 2022 was received from the Chairman of the People’s Democratic Party, Edo State Chapter, Doctor Anthony Aziegbemi.
She explained that the petition contained certain components that required informed and expert opinion which the Independent National Electoral Commission was best suited to provide towards aiding the Force in arriving at a credible investigative outcome.
In furtherance to this and in appreciation of the inter-agency collaborative relationship between the Police and INEC in the Command, the Edo State INEC Resident Electoral Commissioner was invited, not as a suspect as being falsely projected in the media, but as an expert source to meet with the police leadership in the Command towards aiding the police in addressing the technical issues in the investigative process.
She clarified that such administrative interactions between the leadership of the Nigeria Police and INEC is routine and not new.
ASP Iwegbu said contrary to the mischievous information being peddled on social media by ill-intentioned individuals, the INEC Resident Electoral Commissioner was not invited to the Command Headquarters as a suspect, neither was he treated as one nor detained by the Command.
www.itvradiong.com
www.youtube.com/itvradiong
www.facebook.com/itvradiong
Twitter: @itvradiong
Instagram: @itvng
Share
Previous Edo State Govt. Set To Reconstruct Agekpanu Ossi River Bridge Abandoned For Over 40 Years
Next Resident Doctors Issue Two-Week Ultimatum To Fed. Govt. To Implement Agreement.