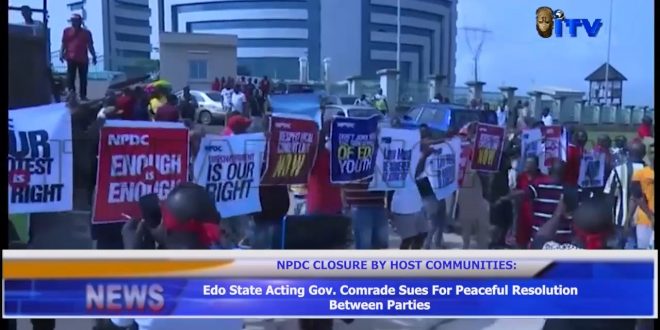 The acting Governor of Edo State, Comrade Philip Shaibu has sued for a peaceful resolution between the management of the Nigerian Petroleum Development Company and leaders of the host communities in Benin City.
The acting governor made the government’s position known when he received the management of NPDC and leaders of the host communities at the government house to broker peace following a protest by the communities over what they described as alleged marginalisation by NPDC.
Government House Correspondent Patience Osarogiuwa has details.
www.itvradiong.com
www.youtube.com/itvradiong
www.facebook.com/itvradiong
Twitter: @itvradiong
Instagram: @itvng
Share
Previous Host Communities Host Community Of AAU, Ekpoma Protest Alleged Marginalization By Management
Next EDHA Passes Bill For Full Integration Of Persons With Disabilities Into The Society