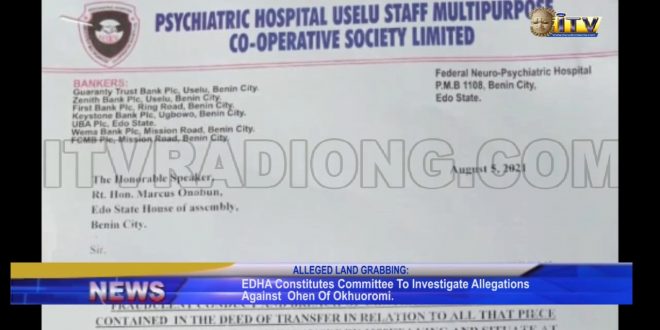 EDHA constitutes committee to investigate allegations against Ohen of Okhuoromi

EDHA Set To Repeal Bendel Sports Council law of 1967: Enact Edo State Sports Commission Law 2021, Constitutes Committee To Investigate Allegations Of Land Grabbing Against Ohen of Okhuoromi.
Edo State House of Assembly has constituted a three-man ad-hoc committee to investigate allegations of land grabbing against Ovbokhan Igbinovia, the Ohen of Okhuoromi in Oredo Local Government area.
Kingsley Uchegbu reports that the development followed a petition by members of the Psychiatric Hospital Uselu Staff Multipurpose Cooperative Society.
The petition addressed to the Speaker and signed by the President of the cooperative society on behalf of members appealed to the House to investigate alleged forcible entry, illegal occupation, violence, fraudulent conduct, and breach of contract as contained in the deed of contract.
This they said is in relation to all the pieces and parcels of land measuring one thousand by two hundred feet situated in Okhuoromi, Oredo local government area.
The petition read by the clerk of the House also solicited the intervention of the House in reclaiming the property procured in 2016  and encroached upon by some persons led by the Ohen, Odionwere, and Elders of Okhuoromi.
The Speaker, Marcus Onobun assured that the House will step in to ensure the protection of investments in landed properties of residents against the backdrop of the private property protection law recently signed by the state governor.
The Speaker subsequently constituted a three-member ad hoc committee to investigate the allegations.
The House during plenary also considered at second reading of the bill for a law to repeal Bendel Sports Council law.
Debate on the new bill kicked off by the Majority leader, Henry Okhuarobo, and other members who spoke in favour seeks to repeal the existing law of 1967 and enact the Edo State Sports Commission law 2021.
Speaker, Marcus Onobun while highlighting some gains of the fifty-four-year-old bill referred it to the house standing committee on sports for fine-tuning ahead consideration on a later date.
www.itvradiong.com
www.youtube.com/itvradiong
www.facebook.com/itvradiong
Instagram: @itvng
Share
Previous LAND GRABBERS: Obaseki reads out riot act to culprits.
Next Oba of Benin Hosts Journalists,  Family members in celebration of Royal  Quadruplets.