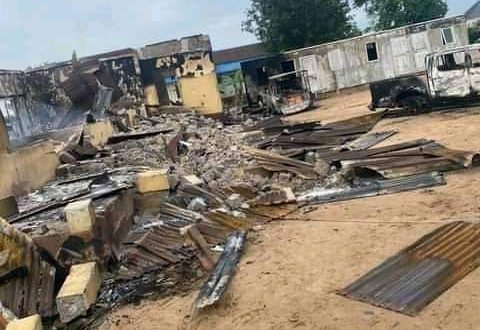 There was tension at Ashaka community in Ndokwa East local government area, Delta state as over twenty gunmen on Sunday attacked a police station in the community with explosives suspected to be improvised explosive devices.

The gunmen who were repelled by the policemen, however, burnt down the station.

although no life was said to have been lost in the attack, the hoodlums, however, set ablaze the operational vehicles of the command.

Confirming the incident, the command s acting spokesman, DSP Bright Edafe said unprovoked attacks on the police will not deter the force from providing the needed security in any community in Delta State.

He said that the hoodlums who perpetrated the act will not go free, as serious efforts were on to arrest them and bring them to book.
www.itvradiong.com
www.youtube.com/itvradiong
www.facebook.com/itvradiong
Twitter: @itvradiong
Instagram: @itvng
Share
Previous SCOAN members weep, suspend service over T.B.Joshua’s death
Next Gov. Obaseki asks Central/South Senatorial Districts Leaders to unite