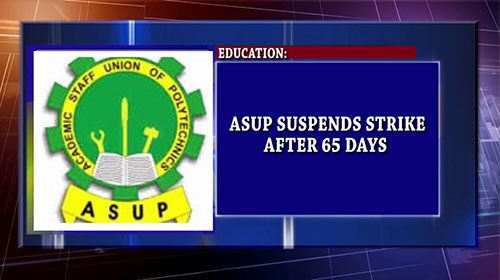 The Academic Staff Union of Polytechnics, ASUP has suspended its Sixty-five day-old strike.

The decision to suspend the strike followed an appraisal of the report indicating the gradual implementation of the items contained in the Memorandum of Action signed between the Union and the Federal Government.

According to a statement issued by the National Publicity Secretary, Abdullahi Yalwa, the suspension of the strike will take effect from the Tenth of June, 2021.

In reaching the decision to suspend the strike, the union said it took into cognizance the appeals made by the government, revered traditional stools in the country, members of the National Assembly, Chairmen of Governing Councils of Federal Polytechnics, and members of the public who showed varied interests in the matter.