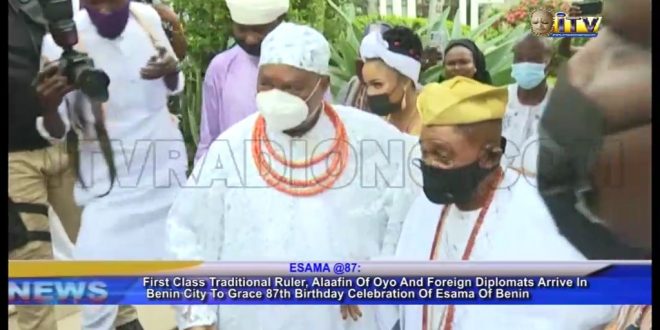 Benin Airport witnessed influx of dignitaries from different parts of the world to be Part of the Eighty Seventh Birthday Celebration of the Esama of Benin and honourary Romanian Consul to Edo and Delta States of Nigeria, Sir, Chief, Doctor Gabriel Osawaru Igbinedion.
Best Mbiere reports the Alaafin of Oyo, His Royal Majesty, Oba Lamidi Oloyiwola, Adeyemi the Third, the Ambassador of Kenyan to Nigeria, His Excellency Wilfred Maxhage, Wife of former Prime Minister of Kenyan, Doctor Bella Odinga were amongst the several dignitaries who graced the event.
www.itvradiong.com
www.youtube.com/itvradiong
www.facebook.com/itvradiong
Instagram: @itvng
Share
Previous Esama of Benin holds grand reception for guests in celebration 87th birthday
Next Management and Board of IUTH felicitates with Esama of Benin at 87