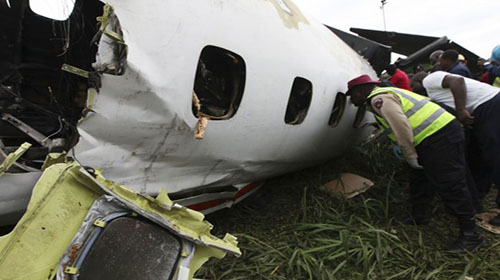 The National Youth Council of Nigeria (NYCN) has said it is unacceptable for the nation to lose over 20 military personnel including a serving Chief of Army Staff as well as three military planes in three separate aircrashes within three months.

Consequently, it has called for the sack of the Chief of Air Staff, Air Marshal Isiaka Oladayo Amao, and demanded a thorough probe on the fleet of military planes to ascertain airworthiness. Similarly, all military air assets and supporting infrastructure should be upgraded including the training of personnel.

The umbrella youth body’s position is coming on the heels of a military plane crash that claimed the life of Chief of Army Staff, Lt. Gen. Ibrahim Attahiru, and 10 other military personnel.

A statement signed by NYCN President, Solomon Adodo said the various Arms of the Council at an emergency meeting held on Monday resolved that somebody needed to be held responsible for the magnitude of the loss of lives within such a short period.

“The NYCN received with shock the news of the plane crash that claimed the life of the Chief of Army Staff, Lt. Gen. Ibrahim Attahiru, and 10 others who were on an official assignment in Kaduna State to attend the passing out parade at the Nigerian Army Depot in Zaria. We sincerely condole with the families of our fallen heroes and pray to God to grant them strength.

“We are worried that in the spate of three months, we have had three different military planes crashing. over 20 military officers have lost their lives in 3 crashes across the country. This is unacceptable to the youth. Recall that on February 21, 2021, a Minna-bound military jet crashed, killing all 7 onboard. In less than 6 weeks, particularly on April 2, 2021, another Alpha Light Attack Jet went missing in the air and later reported crashed. And in another 7 weeks, May 21, 2021, yet another crash of a military aircraft, this time killing the Chief of Army Staff and other senior officers.

“As it stands, no one can vouch for the integrity of all planes managed by the Nigeria Air Force including Air Force 1 which transports President Muhammadu Buhari. It is high time we begin to hold people in authority accountable for their stewardship. This is why the NYCN believes the current Chief of Air Staff should be relieved and a more competent person who can guarantee the integrity of our Air Force assets be appointed.

“No military anywhere in the world can pretend that it is okay to record plane crashes on bi-monthly bases. And no country or a people can accept that. We, therefore, demand grounding of all military planes pending the outcome of the investigation which will ascertain the airworthiness of the military air fleet. Also, we demand that the result of earlier military plane crashes investigations to be published and a military Committee of Enquiry empaneled to investigate the incessant crashes.”.

“The frequency of the crashes and the damage it has done within the spate of three months leaves a bitter taste in the mouth. The Chief of Air Staff is obviously failing to deliver on the job. Thus, we call for his immediate sack”, the statement noted.

While we acknowledge that several factors could lead to planes crashing, the manner and frequency of these crashes have no doubt given a blow to the fight against terror in our dear nation.

“Our call has become imperative because major assets relevant to the prosecution of the war against terror are continuously coming in harm’s way and another breathe the morale of our soldiers is being dampened by these happenings. While this could be considered an act of nature, it is becoming worrisome. Pragmatic steps must therefore be taken to forestall further occurrences if not, the war against terror will be brought to a state of ridicule, the statement added.

While mourning all the lives cut short by the ill-fated plane that killed the COAS and other promising officers in their service to motherland, and of several victims thus far, the NYCN urge the government not to give room for enemies and saboteurs of the war against terror to have the final laugh.